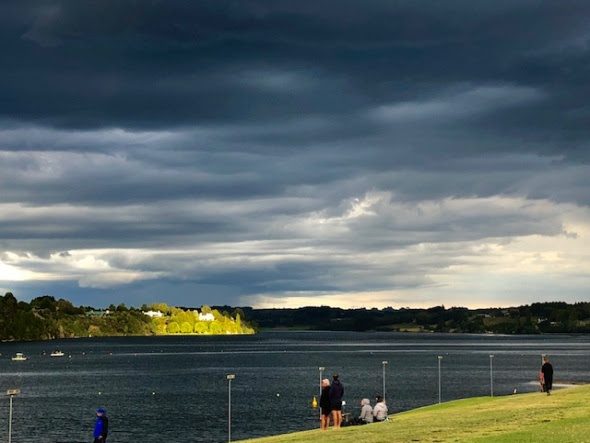 NZDBA has always run a breast cancer division at National events and this year Dragons Abreast Brisbane was invited by Meri Gibson, member of Abreast of Life, to compete as a part of a Trans Tasman challenge.

Angie is a proud member of DAA and works hard for the organisation, managing DAA’s largest fundraiser – October’s Dragon Boat Festival in Sydney’s Darling Bay. Those who know spent time with Angie will attest to her warmth and caring nature, and also her passion and spirit on the water! She made a wonderful addition to MBT’s team.

Having been invited to be a member of ‘Team Missabittatitti’ (MBT) aka Dragons Abreast Brisbane (DAB) to participate at the New Zealand Dragon Boat Association (NZDBA) National Championships in the Breast Cancer category on Lake Karapiro, I hopped on a plane in Sydney, Auckland bound!

I had decided to head over a week earlier to see the sights of Auckland and Hamilton as I had never travelled to the North Island for any length of time and I am so glad that I did! What a funky City Auckland is. I loved the Viaduct and Silo Park area and I also ventured to Waiheke Island, and, despite the horrendous weather that day, I still got a feel for that eclectic and beautiful part of New Zealand and also managed a ‘wee’ bit of wine tasting! The Auckland Fish Market was great with so much choice and I found a little table in the sun and had a great feed there two days in a row. People were so friendly too.

After Auckland I hopped into a luxury coach for the trip to Hamilton ($11 for the ticket – couldn’t believe how cheap it was!) and stayed with a friend of mine for a couple of nights. She was the perfect tour guide showing me around Hamilton (we walked 15 km one day!). The Hamilton Gardens are superb, don’t be mislead by the name, they are way more than just gardens. There are so many great restaurants and pubs where we had a few meals, Hamilton is just a lovely city as it sits beside the river and has a nice welcoming feeling.

I then checked into our Hotel in Hamilton where I was staying with the MBT mob and waited for two busloads of paddling friends to arrive. The planning of this whole trip by Sue, Di and the crew was absolutely first class; from arranging flights, accommodation, hire of mini vans, registration for the event and also getting me organised as I didn’t have my paddling ID on me!

So day 1 of racing begins with a 5am alarm when all 26 of us climbed into the vans on a very brisk Hamilton morning and made our way to the course! As a very keen photographer I was in heaven as when we arrived, Lake Karapiro was covered in deep fog which started to lift as the sun rose – talk about some National Geographic moments seeing dragon boats racing through lines of fog and then seeing the bigger picture of how stunningly beautiful the whole Lake Karapiro area is!

The event itself was extraordinarily well run, there was no panic, it felt calm and all my teammates concurred with that feeling. The team camaraderie was top notch with sporting teams and the breast cancer teams socialising readily. We were camped next to Abreast of Life from Christchurch where I was able to catch up with friends made in the past and make new ones.

Now let’s talk about marshaling! How much fun was that when the Chief Marshal was talking about Lane Six, but his accent to us Australians sounded like he was saying “Lane Sex”, we could not resist giving him a hard time and there was loads of laughter amongst us all, then suddenly the team chanting began. Team MBT has a wonderful chant, which is well known in Australia and throughout the world, and once we started singing it in the marshaling tents all the other teams joined in – it was so awesome!

We had a wonderful dinner (food was amazing!) with all the other breast cancer crews competing at the Nationals. When we arrived at the door we all had to pick a piece of coloured paper which then coincided with the table colour which meant we were all mixed up together, such a great refreshing idea and a new way to meet other survivors from different Clubs. The dinner was hosted by Boobops from Waikato and the guest speaker was from the Dear Boobs Project, a very enchanting story, and such a wonderful evening of so much laughter and camaraderie.

Day 2 of racing consisted of the 2 km turn race, which is always great fun and highly contested. After the breast cancer racing was finished we rafted the boats together for the Flowers ceremony followed by a minute’s silence to remember those women and some men who have lost their battle with this disease. The flower ceremony is always a very moving and poignant ceremony, and this one was topped off by a group of Kiwis randomly and totally unscripted performing the Haka! I have goose bumps writing this as it was so powerful and performed out of total respect for the survivors – a memory I will NEVER forget!

All in all, it was the most amazing experience. I have been a dragon boat paddler since 2005 and have paddled all over Australia and the World and I have NEVER paddled amongst such beautiful scenery before. Maybe it’s time the IBCPC event came back to the Southern Hemisphere – I couldn’t think of a better venue than New Zealand’s Lake Karapiro!

Dragons in the Mist

Our New Race Shirts Have Arrived