In 1999 our founding member Janelle Gamble attended a national conference in Canberra where she was first introduced to the many benefits of dragon boat paddling for breast cancer survivors by Canadian presenter Sharon Batt. Despite being terrified of both water and sharks, Janelle allowed herself to be persuaded by Michelle Hanton to join her and a group of other intrepid survivors at the 2000 Australian National Championships in Penrith, New South Wales.

Janelle was now faced with the task of learning how to paddle. Luckily Dallas Piwari and Tracy Evans had recently started a small club called Brisbane River Dragons at the “18 Sailing Club in Bulimba. Despite slipping on the pontoon and starting her first session face down on the ground, like all good survivor’s Janelle picked herself up, dusted herself down, got in the boat and discovered a passion for all things dragon boating that continues to this day.

After only five weeks on the water Janelle was the only Queensland representative in the first breast cancer team to take the water in an Australian competition. The team came third out of three but received a standing ovation for their efforts from their fellow competitors.

I started with DAB, and went on to achieve every possible goal as a competitive paddler. I have been so very fortunate to have travelled the world via dragon boating, and all because of breast cancer. 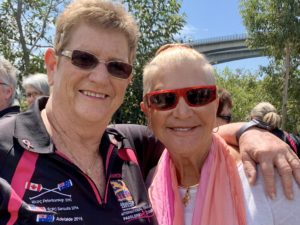 On returning to Brisbane, Janelle convinced some of her fellow volunteers at Qld Cancer Council that they should try this wonderful new activity she had discovered. Edith Cooper, Sue Bowen and Leonie Young were the first to join followed by Lyn Moore, Ann Gledson, and our Dragon Angels Pat (Tiger) Hill and Gayle Creed. And so, Dragons Abreast Brisbane (DAB) was created although the team was initially referred to as DA Queensland as there was no other DA group in the state at the time.

DAB was well supported by the paddlers from  Brisbane River Dragons Dragon Boat and Outrigger Canoe Club Inc (BRD) and competed with them at the 2001 and 2002 Australian National Titles. Initially the club only had one boat which was an old green Geelong model hired from the GC Chinese Club’s Dr Mark Lee. However, both BRD and DAB benefitted enormously when Janelle Gamble with the assistance of Craig Walton approached the South Bank Corporation to request support for breast cancer survivor paddlers. The CEO of South Bank Mr Bill Grant not only provided the funds but also access to South Bank and its facilities to host BRD’s annual corporate event.

By 2002 the club had a full breast cancer team which entered the Australian national titles on Hinze Dam in the Gold Coast Hinterland. 2002 was also the first time that DAA participated in the World Club Crew Championships in Rome. DAA paddlers were part of a joint team of breast cancer survivors from Canada and Australia, 7 of whom were from DAB.

In 2004 DAB members took on the Ord River challenge and were filmed by the ABC program “Australian Story". Superstars in the making. You can read the transcript here.

Where did the name Team Missabittatitti come from? 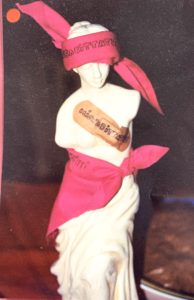 The name was born at a celebration for Corina Bradley who would go on to achieve great things as a paddler, sweep and coach both nationally and internationally. However, at this stage Corina was just finishing cancer treatment and decided she wanted to have a “Survivor” party to mark the occasion. Tribes were formed and the ever-entertaining Peterke Cardell came up with the tribal name of Missabittatitti. The name stuck and DA Brisbane became known around the world as Team Missabittatitti . In addition, the name continues to raise breast cancer awareness and cause problems for many race announcers and a great deal of humour for their audiences!

Achievements Over the Years

Team Missabittatitti members come in all shapes, sizes and ages and from a range of diverse backgrounds. They are a very spirited and fun-loving group and certainly know how to have a good time.

Many members are content to paddle socially for fun, fitness and solely for DAB. Others who are more competitive have the opportunity to reach higher levels and paddle with the BRD sports team. Some members of Dragons Abreast Brisbane have been selected for Queensland representative teams and have also represented Australia as paddlers, sweeps and drummers.

Many of our members have had the opportunity to travel and compete at International dragon boat racing events in Canada, Italy, England, New Zealand, South Africa, Germany, China, Singapore and the USA under the Dragons Abreast banner.

DA Brisbane became an Incorporated Association in September 2015 and membership continues to grow. There are now 80 Breast Cancer survivor members and 25 Supporter members. The club is indeed thriving and has a proud history of strong inspirational women who face their battles with breast cancer head-on, get in the boat, have fun and keep paddling with the famous words of our founder Janelle Gamble ringing in their ears - “hooters to knees girls!”.

Any Saturday morning you will find us paddling on the Brisbane River, meeting early at the Colmslie Reserve. You might hear us yelling out a “cooee” under the Gateway Bridge if you are lucky. Or you might hear our noisy crowd enjoying a well-earned breakfast at Café Tropicana after paddling.

While we are not a support group, we are most definitely a family. Why don’t you come and join us?! This was the first Nationals that DAA ever competed in, in Darwin.  It is comprised of women from Darwin, Canberra and Brisbane. We had three teams of 8 in each boat.  In the Qld boat there was only Janelle Gamble and I as survivors and the rest were BRD supporters.  The NSW team had Pam Bell who had never seen a dragon boat till she arrived in Darwin.  She was put in the drummer seat.  The seat was tied on and much higher than now.  She did the first race then paddled as she would not get onto the drummer seat again. It was the first time I made my hair pink and it lasted about 6 weeks.

The most memorable thing was that the whole of the paddlers formed a guard of honour for us. An impromptu action which is now the norm.  Needless to say that every single person was in tears.