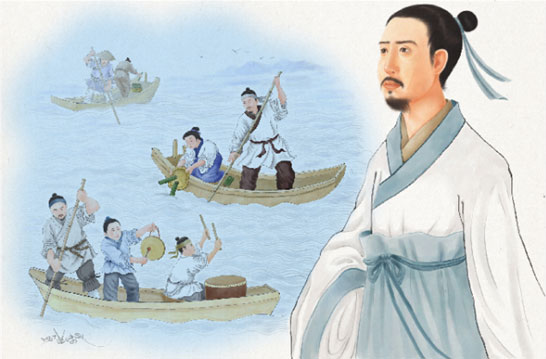 "The roots of dragon boat racing date back to the 4th Century BC in China. According to legend, Qu Yuan, a revered poet and statesman, hurled himself into the Mi Lo River to protest the corrupt regime of the reigning Chou Dynasty emperor. When local boatmen saw Qu Yuan disappear beneath the water, they raced out to save him. Sadly, they were too late.

"Fearing that his body would be preyed upon by fish and evil spirits and other denizens of the river, the boatmen beat their paddles furiously upon the water. It is said that they also threw rice dumplings wrapped in silk into the river as a sacrifice to his heroic spirit.

"Over time, dragon boat racing became a way to commemorate the death of Qu Yuan and to celebrate his heroic spirit. Today, Qu Yuan's death is honoured each year on the fifth day of the fifth lunar month at Dragon Boat Festivals around the world. Rice dumplings are now considered a festival delicacy and are wrapped today in bamboo leaves instead of silk. Before each festival ancient blessing rituals such as 'Awakening the Dragons' (rousing the dragon boats to life by a special eye-dotting ceremony) are performed."

Awakening of the Dragon involves a Daoist priest dotting the bulging eyes of the carved dragon head attached to the boat. Doing so symbolizes the dragon ending its slumber and re-energizing its spirit, or qi (pronounced: chee). In modern dragon boat festivals, a representative can be invited to step forward to dot the eyes on a dragon boat head with a brush dipped in red paint.